Dinner and memories made with your kids, a package of pasta, and my ebook! Click to get cookin'!
Home | On the Menu | Breakfast | Cheesy Potato, Egg, and Bacon Skillet

Cheesy bacon, egg, and potato skillet is the perfect way to wake up! With one pan, this can be ready in under 30 minutes!

Guys! I have no clue what is going on, but my kids (looking at you, Cortland) have been waking up at 5:30 A.M. or earlier. It’s simply exhausting. I am not ready to take on the world at such an hour!

Don’t even think for one second that these little minions don’t start demanding breakfast the second they open their sweet little eyes. Like where do they put it all?! They go for multiple rounds of breakfast, including fruits, proteins, and everything in between.

This cheesy potato skillet with a simple breakfast I threw together to satisfy their hunger and their need for a variety on their plate.

First, the bacon is cooked to crunchy perfection (I prefer my bacon nearly burnt), then the potatoes are pan seared in the bacon grease. Next, you scoot over the potatoes and crack the eggs right there in the pan. Top with your favorite cheddar cheese, and BAM you have yourself an easy breakfast skillet.

How to make Potato and Egg Breakfast Skillet 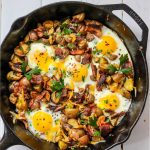 Cheesy bacon, egg, and potato skillet is the perfect way to wake up! With one pan, this can be ready in under 30 minutes! 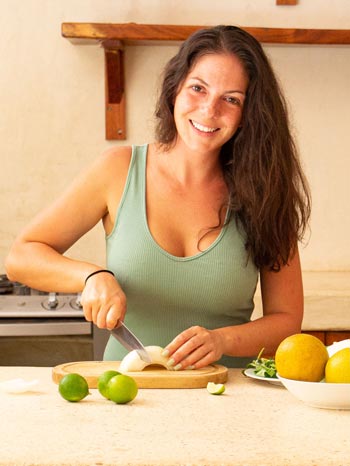