Dinner and memories made with your kids, a package of pasta, and my ebook! Click to get cookin'!
Home | Featured Farms | Crescere Farms

Driving up the  Crescere Farms’ driveway,  tucked away in Holt, Florida, you’ll be greeted by an excited, friendly Australian Shepard, and some of Florida’s most gorgeous heirloom tomatoes.  The 40-acre farm boasts numerous greenhouses with a mushroom compost system that organically grows luscious, healthy plants.  With over 100 varieties of tomatoes grown, you’ve got to see how this farm does it! 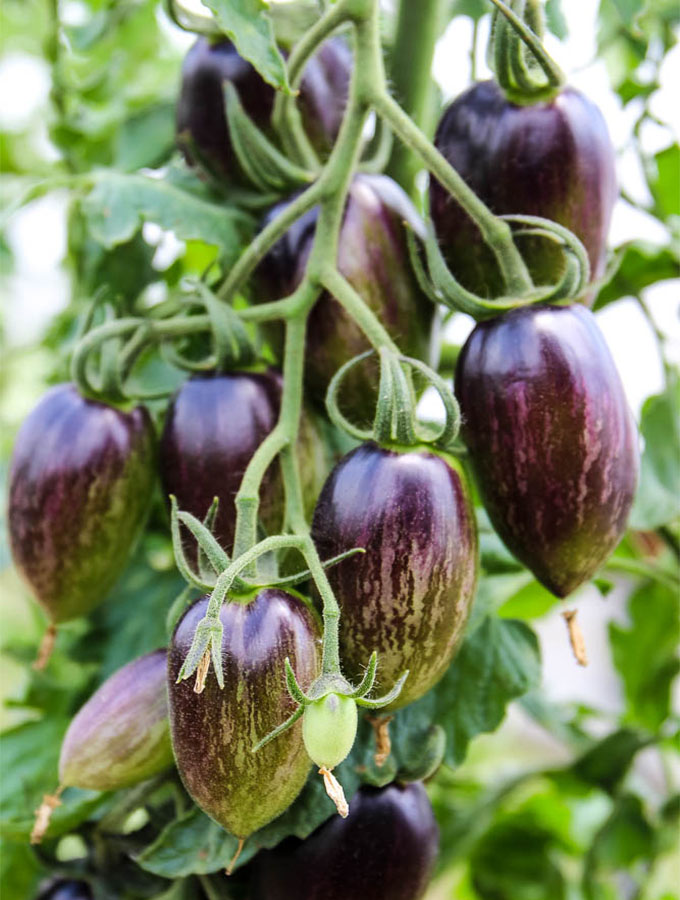 Holt is a small country town in Florida, consisting less than 3,000 people, and about 50 miles inland.  Live oaks sprawl along the quiet road leading up to the farm,  blanketing the road from the harsh direct Florida sunshine. Tucked away at the end of the dirt road is Crescere Farms, an heirloom tomato farm the Florida panhandle has come to know and love.

Getting out of my car, I was greeted by a fluffy Australian Shepard dog named Rusty who was just begging for a pat.  Jim and Deb Eveleth warmly greeted me and welcomed me to their farm.  Rusty pranced around, making it known he loves company.  Rusty is a familiar face around the farm, but he belongs to the neighbor.  He comes to the farm daily to hang out, then is brought home nightly.  The farm gives an instant feeling of community and teamwork. 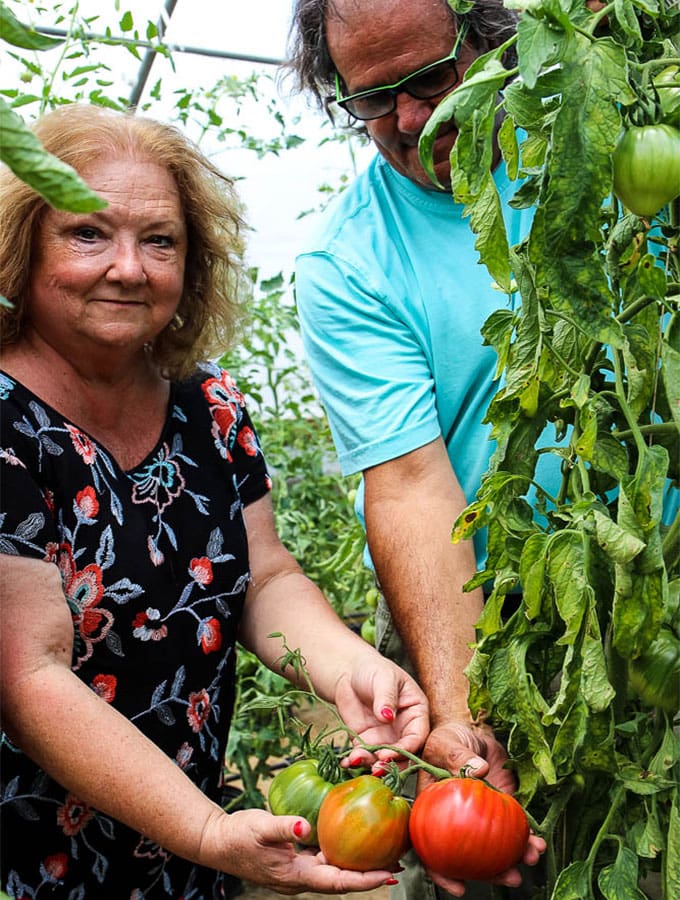 Crescere Farm’s seeds were planted a while back when Jim owned a brokerage firm in Manhattan, NY.  A man Jim met claimed he would be the world’s largest tomato producer in the world, and that peeked Jim’s interest. Working together, Jim learned the ins and outs of tomato growing, meeting many cultures along the way, namely the Dutch,  and implementing their gardening techniques. 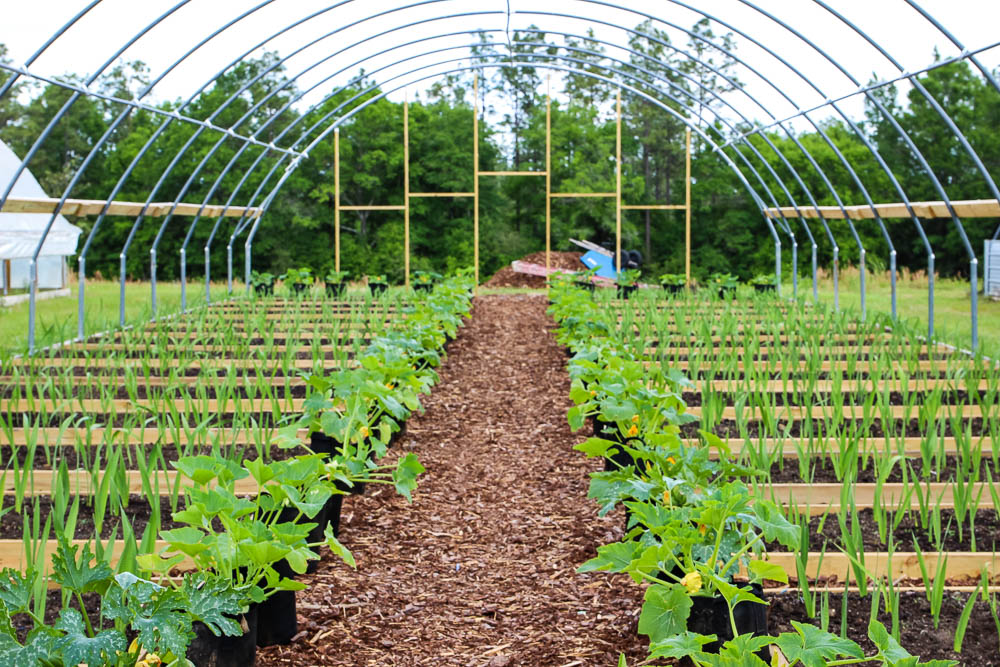 Using those learned techniques, and experimenting with new ones is one of Jim’s favorite aspects of owning a farm.  “Growing what we want to grow and when we want to grow it, we’re not a big production farm that’s got to make money, we pretty much do what we want, we try different things and my employees have the liberty to do so, too.”  Jim said, reflecting on his successful four years on the farm.  “If you get an idea, go try it, or if you have a better way of doing something around here, just go try it, grow it, see what happens.”

What does one do with so many tomatoes?!  Deb’s favorite thing to do with excess tomatoes, besides donating them, is making a tomato and basil jam!  The jam is pleasantly sweet, with a hearty tomato base, and the basil plays the background noise.  This jam would pair beautifully with toast and gorgonzola cheese! 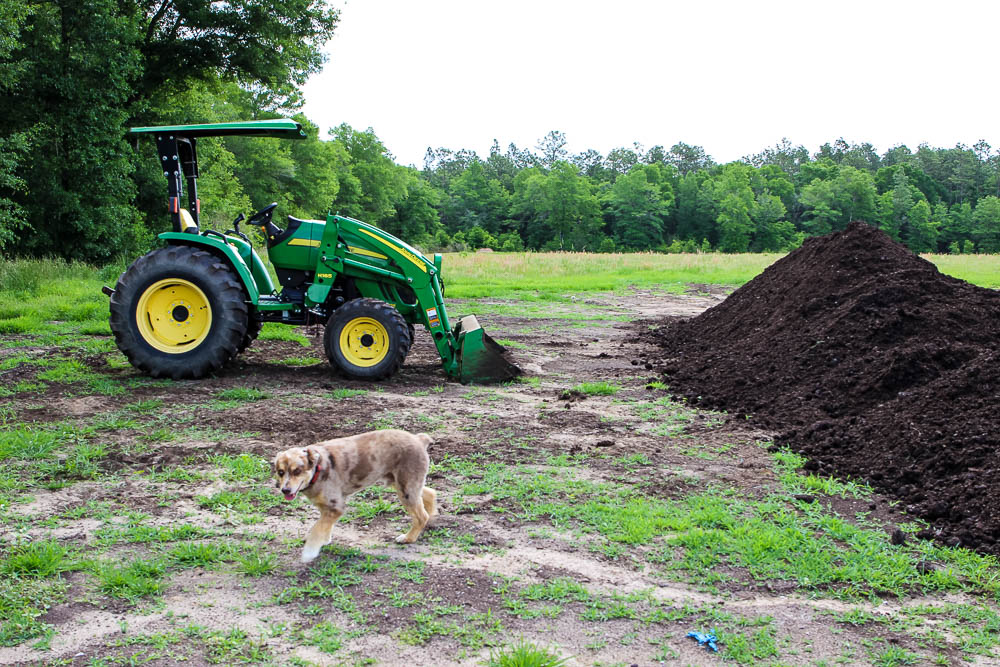 First stop was the compost, which was important.  To understand the basis of the farm was to understand their very foundation- organic mushroom compost.  Driving up to the compost site, deep smells of Earthy mushrooms draws your attention to the rich heaps of black soil.

Winding down from their busy season, there were still heaps of cooking compost, all in different stages.  With the right techniques, the compost does not draw an unreasonable amount of insects, which are known to be a major problem in Florida. Driving up to the compost site, deep smells of Earthy mushrooms draws your attention to the rich heaps of soil. 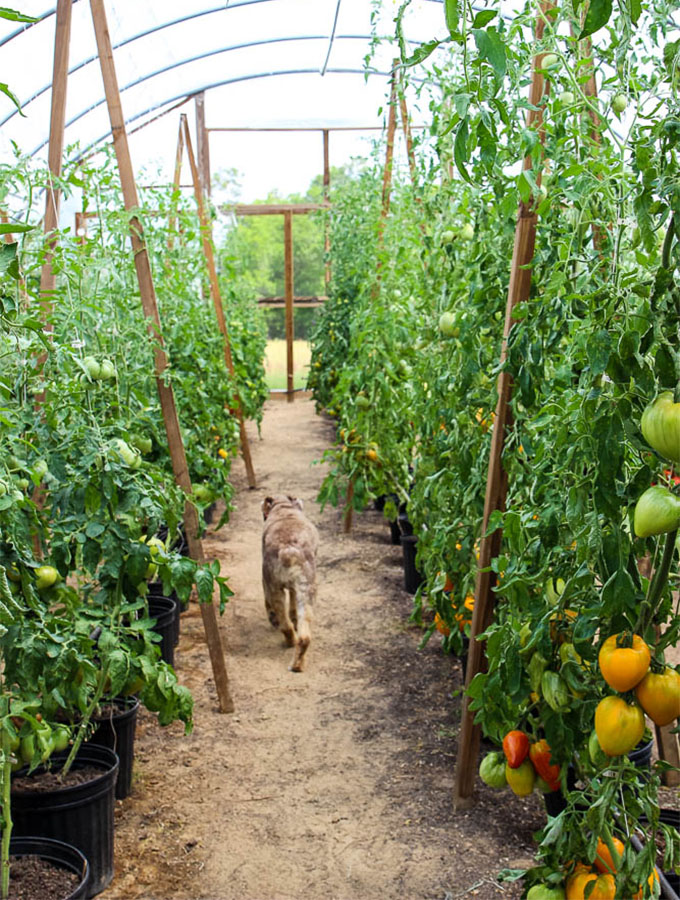 Each compost bed is turned regularly and has 1 year aged chicken and rabbit manure.  They are carefully monitored and tested, providing some high-quality soil to the local region. Florida is thought to be a marvelous place to garden, as the extended growing season seems appealing.  On the flip side, the scorching sun proves to be too harsh for a lot of gardens, and the soil is generally clay or sand.  Raised beds filled with compost is the ideal way to grow in Florida, making this compost a hot commodity.

Crescere Farms is all about giving back to the community and teaching locals how to garden.  Holt Middle School created an agriculture program which Crescere Farms gladly donated compost,  incubators, and labor to.  Now the children are able to enjoy outdoor time to garden and understand sustainable gardening.

With so many tomatoes ripening at different times, the tomatoes that will go bad before the Saturday Farmer’s Market are donated to the Holt food bank, along with fresh eggs.  When the food bank expanded and created a small garden, Jim and Deb donated their compost to the project.  Numerous gardens throughout the local region are filled with this compost, including the community garden located at co-op grocery store, Ever’mans. 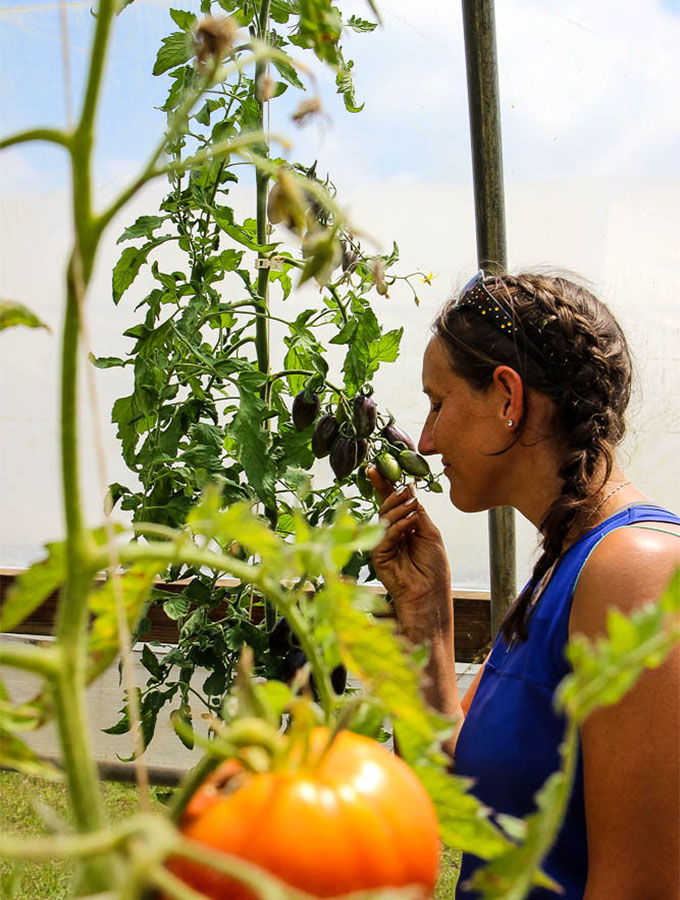 What’s a farm without a terrific crew?  The hardest struggle has been finding people who are ready to work the long hours in the sun.  Deb, reflecting on the struggles of their young farm, said “Bea never stops.  It’s tough because people just have this glamourous idea that it would be fun to have life on the farm, and some of them adapt really well, like Bea, she just started from day one. she just goes, like an Energizer bunny.  Not everyone’s that way.”

Bea Skinner is Jim’s right hand (wo)man.  She really never stops.  Throughout this interview, Bea could be found chatting with us, while raking leaves, filling pots of dirt, or clipping plants.  With the energy and knowledge Bea has, it’s no wonder Crescere Farms is so tidy and organized!  Great farm hands are hard to come by,  but worth their weight in gold. 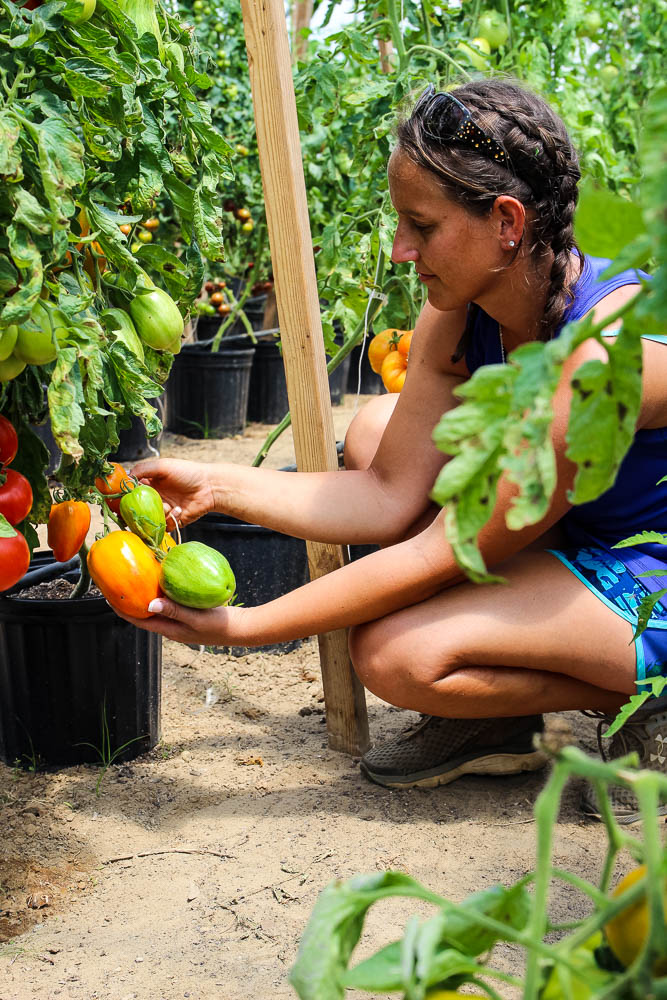 When  Jim was asked how he kept the farm so spotless and organized, he motioned to the tomatoes and said “these are Bea’s babies!”.  Previously, she had worked on a high producing strawberry farm, gaining knowledge, discipline, and the love of farming.  Coming to Crescere Farms, she quickly found a love for the heirloom tomatoes and the many varieties she gets to grow.

Employees of Crescere Farms are not only encouraged to experiment in their practices, but are urged to take home fresh produce and eat what they can.  Teamwork, dedication, and passion are the building blocks of this farm. With produce that is grown with honesty and quality soil, Crescere Farms enhances the community and the people who enjoy their sun-ripened tomatoes. 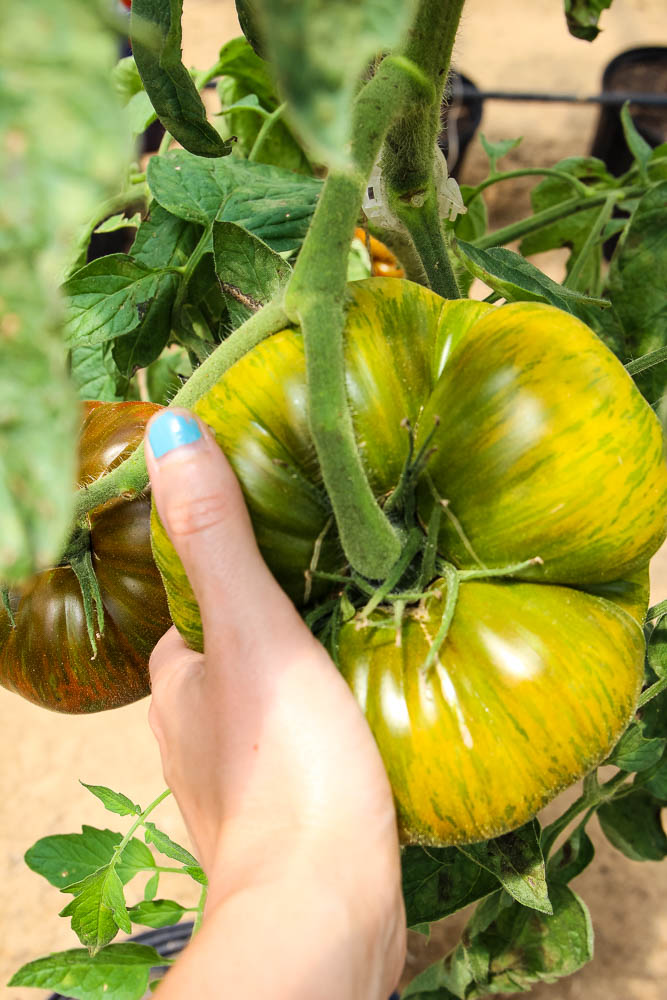